Watch your steps! An altered stepping pattern after a stroke

Among stroke survivors, mobility can be limited by a high risk of falls. Such falls commonly occur during walking, and are often due to self-generated movement errors rather than external perturbations such as slips or trips. Unfortunately, rehabilitation approaches focused on strength or general balance training have failed to effectively reduce fall incidence in this population, despite the success of these approaches in older adults without neurological injuries. This discrepancy may be partially due to a lack of consideration of the gait characteristics that make stroke survivors particularly susceptible to a loss of balance. The purpose of our study was to investigate a gait characteristic that may contribute to altered balance – the adjustment of step width to stabilize fluctuations in the mechanical state of the body.

To investigate step width adjustments, 20 chronic stroke survivors walked on a treadmill at their self-selected and fastest-comfortable speeds. We quantified the link between mediolateral pelvis motion and step width on a step-by-step basis using regressions and partial correlations. Similar methods used in neurologically-intact adults have previously revealed that step width tends to increase with larger pelvis displacements and with higher velocities away from the stance leg (Fig. 1). This is thought to help stabilize the mediolateral motion of the body. Our results showed that the link between pelvis displacement and step width was weaker for steps taken with the paretic leg than for steps taken with the non-paretic leg. Moreover, this relationship was not affected by walking speed. Accompanying the weaker link between pelvis displacement and paretic step width, steps taken with the paretic leg were placed more laterally, with a larger and more variable mediolateral margin of stability – a metric often used to assess walking balance.

The altered behavior observed with paretic steps is consistent with – but does not prove – the use of a more conservative foot placement strategy to reduce the risk of loss of balance towards the paretic side, which may otherwise result from reduced paretic stepping accuracy. However, these results may provoke more questions than they answer. Most notably, can the altered biomechanical behavior be changed through training focused on paretic steps? Would doing so improve post-stroke walking balance and reduce the risk of falls? Ongoing research is working toward answering these questions, with the ultimate goal of contributing to new therapeutic approaches for improving functional mobility after a stroke. 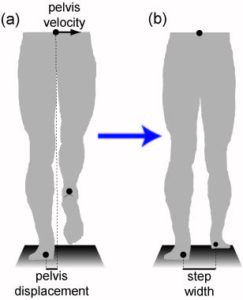 Figure 1. In neurologically-intact adults, the mediolateral displacement and velocity of the pelvis during a step (a) is predictive of the step width at the end of the step (b). The strength of this relationship can be quantified using regressions and partial correlations over a series of steps.

Jesse’s research focuses on understanding why people move the way they do. He has a background in biomedical engineering, and is working toward applying a mechanistic understanding of human movement to the development of new rehabilitation methods for people who have experienced a stroke.

Dual-tasking or single-tasking in the lab? Which better reflects every-day walking in older adults?