Learning but not sharing: retention but no interlimb transfer of gait adaptations following perturbations to one leg

To improve the effectiveness of fall prevention interventions, we need to better understand how to encourage long-term improvements in walking stability. Part of that involves how we train people to cope with sudden, unexpected disturbances such as trips and slips. Another factor is if the training effects can be transferred to benefit other tasks. In this study, we aimed to investigate how short-term improvements in coping with repeated, sudden disturbances to one leg during walking would be “remembered” after one month, and if the untrained leg would benefit from the trained leg’s experience.

To achieve this, we had eighteen healthy young adults walk on a dual-belt treadmill (individual belts under each foot). During about 14 minutes of walking, we applied ten unexpected treadmill belt accelerations (the first and last perturbing the right leg, the others perturbing the left leg). We repeated this assessment after one month. We used the margin of stability (MoS) to assess how the stability of the body configuration (accounting for centre of mass velocity) changed during the first eight steps following the first and last perturbation to each leg, on each day. We found significant improvements in MoS on the first day for perturbations to the trained leg (Figure A), but the untrained leg showed no differences before and after the training (Figure B). On the second day, the first perturbation to the trained leg led to a very similar response to the post-training state on day one, indicating almost full retention of the training effects, one month later (Figure C).

Our findings demonstrated that gait perturbations can stimulate large training effects that can be retained over time. The almost fully retained training effect after one month of not training shows that the task is promising for falls prevention interventions, where long-term effects are very important. However, these effects were not transferable across limbs, despite the whole-body nature of the task. This suggests that interventions focusing on improving reactive gait stability should incorporate perturbations to both limbs. An open question for future research is whether the training effects after only eight perturbations could be transferred or generalised to other similar gait stability tasks such as overground trips or slips during daily life activities. 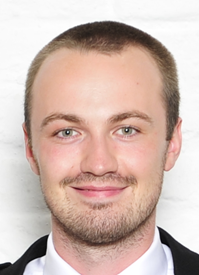 Chris’ core research centres around the control and adaptation of gait stability in healthy and clinical populations, with a focus on falls risk and reduction among older people. Two specific subtopics within his PhD thesis work were muscle-tendon biomechanics and vestibular function and their relationship with gait stability.

Speeding up during gait :The workings of our neuromuscular transmission system