Virtual reality for your grandparents

The prevalence of falls in older adults is huge: one out of every 3 adults aged 65 years or older will fall at least once per year. These numbers are even higher in neurodegenerative conditions such as in Parkinson’s disease and in people with cognitive impairments.  Recent studies showed that certain aspects of cognition, especially executive function, are critical for safe ambulation.  This makes sense intuitively if we imagine the cognitive skills needed just to cross a busy intersection or to negotiate obstacles. We aimed to use virtual reality to safely train the motor aspects that are important for fall risk, while also implicitly teaching participants to improve cognitive functions vital to safe ambulation.

We carried out a randomized controlled trial at five clinical centers. Adults aged 60−90 years with a high risk of falls, i.e., two or more falls in the 6 months before the study, and with varied motor and cognitive deficits were randomly assigned to receive 6 weeks of treadmill training plus VR or treadmill training alone. Both groups aimed to train three times per week for 6 weeks, with each session lasting about 45 minutes. The VR system consisted of a motion-capture camera and a computer-generated simulation that includes real-life challenges such as obstacles, multiple pathways, and distracters that requires continual adjustment of the stepping pattern. The subject’s gait was measured in real-time and projected on into the VR that was displayed on a large screen. The primary outcome was the incident rate of falls during the 6 months after the end of training. 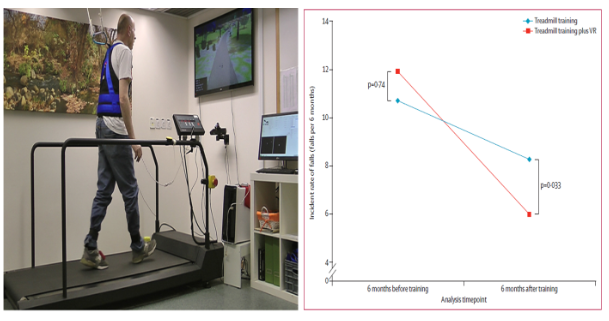 Figure 1:  On the left is a picture of the Virtual Reality setting. The user walks on the treadmill while engaging in tasks in the virtual scene. The figure on the right shows the reduction in incident fall rate ,6 months post intervention , in the treadmill  training plus virtual reality group compared to the active control group of treadmill training.

The study has important implications for research and clinical practice. Treadmill training plus VR successfully reduced in fall rates in a diverse group of older adults at high risk for falls. Adherence and participation were very high, no serious adverse events were observed, and participants reported high satisfaction and enjoyment. This RCT demonstrates the added value of the VR component and suggests that this approach could be a viable option for improving motor-cognitive function and reducing fall risk in older adults. 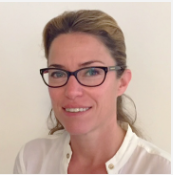 Anat Mirelman  is the director of the Laboratory for Early Markers of Neurodegeneration at the Tel Aviv Medical Centre and a senior lecturer at Sackler school of Medicine at Tel Aviv University. Dr. Mirelman’s main research interests are in the assessment and treatment of motor-cognitive impairments in neurodegenerative conditions and in identifying early markers of disease in populations at risk.