Watch your step when you are carrying a shopping bag

Older adults with history of falls often slow down and have a more variable gait when performing another task at the same time (dual task walking). However, most studies involving dual task paradigms have investigated primarily the walking task, while little attention has been given to performance in the secondary task. The combined task of walking while reaching and grasping an object (prehension) is widely performed during daily life activities, such as picking up a glass, shopping, eating, and others. Importantly, older adults need to adapt their walking patterns to make sure that their gait is stable while conducting such a prehension task. Our study investigated the level of interference between the combined task of walking and prehension with different levels of manual task difficulty.

Fallers and non-fallers were invited to perform three tasks: (1) simple walking (control condition), (2) reaching-to-grasping a dowel during quiet standing, and (3) grasping a dowel wile walking. The dowel was placed on a cylindrical support with different types of bases (wide and narrow) and was surrounded by two obstacles with two different distances between them (short and long). Whole body center of mass and spatiotemporal gait parameters were analyzed to explore changes in walking, reaching (duration and velocity) and grasping (hand grip aperture and velocity). Participants with history of falls walked slower and took wider steps during the dual task walk for the most difficult manual conditions. While reaching, fallers also reduced their body velocity and increased the body stability (margin of dynamic stability) to grasp the dowel compared to non-fallers. When looking at the center of mass anterior-posterior velocity, fallers almost stopped walking to perform the prehension task. Fallers presented slower movement time and lower peak wrist velocity, peak grip aperture velocity, and time-to-peak grip aperture, which indicated a generalized slowing down in movement performance.

In conclusion, fallers showed a more conservative walking strategy. They also decoupled the prehension task from the walking when compared to non-fallers and had to increase body stability in order to perform grasping successfully. Our results suggest that manual tasks may be used as an assessment tool for fall risk prediction. Given that prehension movement is widely used during daily life activities, we suggest that preventive and rehabilitation programs should also emphasize movement exercises to improve the control of upper limbs, especially while performing locomotor tasks. 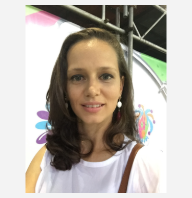 Dr Natalia Madalena Rinaldi is a Professor in the Center of Physical Education and Sports of Federal University of Espirito Santo, Brazil. Her research focuses on the effects of aging on gait and posture and the effects of motor interventions to improve the functional capacity in older adults ().