Do strong muscles lead to a more regular gait pattern?

Gait variability is linked to various negative health outcomes in older adults, such as falls and cognitive impairment. However, the factors underlying gait variability are not yet well understood. The bulk of the research has focused on central nervous system factors, such as the integrity of specific brain areas. However, peripheral factors may also play a role, and muscle strength has not been investigated extensively in relation to gait variability. In principle, it may be assumed that well-functioning muscles move the joints smoothly and steadily, resulting in low gait variability.

We therefore looked at the association between gait variability and muscle strength in community-dwelling older adults. Gait variability was captured in the lab using a single inertial sensor worn at the lower back, which registered accelerations in the anteroposterior, mediolateral and vertical directions. The participants walked under four conditions:  i) at preferred speed, ii) at fast speed, iii) while counting backwards from 50 with intervals of three, and iv) across an uneven surface. Muscle strength was measured as hand grip strength, isometric knee extension strength and the 30-s chair-rise test, and then combined in a single composite score by summing z-scores. Gait variability was calculated using an autocorrelation procedure, which captures kinematic variations over strides. In multiple regression analyses, we found that in nearly all directions and during all conditions except dual task walking, there was a significant association between gait variability and muscle strength.

In this study, muscle strength was measured at maximal effort, which is not generally required during walking. It is possible that individuals who are strong also have better muscle function at lower levels of force production, which could explain our findings. On the other hand, the association may not be entirely causal. Instead, the older adults who were fit and healthy may have been both strong and walked with little variability. As such, health and fitness may have been the common underlying factor. In earlier studies, it has been shown that muscle strength is associated with mortality and other adverse health outcomes. It has also been suggested as a single marker of frailty. The same is holds for gait variability, which has also been found to be associated with frailty. Interestingly, in our study, age was included as a covariate in the multiple regression analyses, and unlike muscle strength, it was poorly associated with gait variability (exemplified in figure 1). In our view, this emphasizes how biological age may be a more important parameter of functioning in older adults, than chronological age.

Figure 1: Relationship between gait variability in the vertical direction on the vertical axis, and muscle strength (panel A), and age (Panel B) on the horizontal axes. Each dot represents an individual and the line shows the best fit. 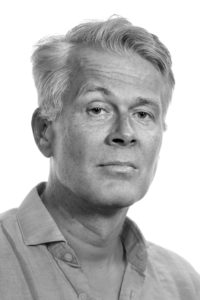 Dr. Bogen is a physiotherapist, and has worked in geriatric and orthopaedic practice. His PhD-project focussed on “Gait in community-living older adults”. He currently works as an associate professor at Western Norway University of Applied Sciences and as a clinical physiotherapist at Haraldsplass Deaconess Hospital. His current projects involve balance and gait in older adults with hearing impairment, and gait in adults with Cerebral Paresis.

Is balancing in your feet? The contribution of foot muscles to postural control

Postural responses are delayed with ageing but responsive to exercise