Can people with stroke learn how not to fall?

People who have had a stroke fall frequently. Many previous studies with older adults have found that exercise, particularly balance training, reduces fall risk. However, comparable studies in stroke survivors indicate that similar exercise training does not prevents falls in this group. People fall when they fail to recover from a loss of balance. Recently, studies have found that ‘perturbation-based balance training’ (PBT), which involves people experiencing repeated balance losses, can improve control of reactions to a loss of balance. Some studies have found that PBT reduces fall rates in healthy older adults or in people with Parkinson’s disease. We wanted to know if PBT could reduce fall rates in people with sub-acute stroke.

Physiotherapists at our institution had started PBT with some of their eligible clients as part of routine care for stroke rehabilitation. Therefore, we conducted a non-randomized study to establish the benefit of PBT compared to non-PBT rehabilitation. We recruited participants with sub-acute stroke at discharge from in-patient rehabilitation if they completed PBT during their routine rehabilitation. We then asked these individuals to report any falls that they experienced in the following six months. We compared fall rates to a matched historical control group who were recruited for another study before physiotherapists had implemented PBT, but who also reported falls in daily life for six months after discharge. Five (out of 31) participants in the PBT group reported 10 falls in the six months post-discharge, whereas ten (out of 31) participants in the historical control group reported 31 falls in the six months. The fall rates in the PBT group were significantly lower than in the control group, when accounting for some characteristics that differed between the two groups at baseline.

The results of this study suggest that PBT might help to prevent falls in people with sub-acute stroke. Because the study was not randomized, the results should be interpreted with some caution. However, since the results are consistent with other studies showing reduced fall rates with PBT, the evidence from this study may be sufficient to recommend PBT in clinical practice. Other studies of PBT used programmable treadmills or custom-built moving platforms to provide the balance perturbations in training. In the current study, the physiotherapist provided manual perturbations (e.g., push or pull; see Figure). This meant that PBT only required equipment that is already in most physiotherapy practices. For this reason, we think it would be relatively easy to implement our PBT program in other settings. 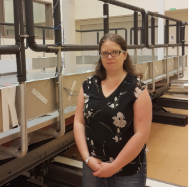 Avril’s research aims to determine how aging and neurologic injury or disease affect balance control and mobility, and how to exploit principles of optimal learning to develop exercise programs that improve balance and mobility. She is particularly interested in applying this work to develop clinically feasible fall-prevention programs.