Recent advances in sensor technology allow for the science of gait features to be applied to new services. These services may comprise of e.g. onsite customisation of footwear or garments, sensor-based applications such as activity monitoring systems, and detailed surveillance monitoring. At the Japanese National Institute of Advanced Industrial Science and Technology, we conducted a study to describe sex- and age-differences in gait features of healthy individuals to support others developing services based on gait features.

In this study, we analysed a large dataset of gait in healthy individuals (99 males and 92 females aged 20 to 75) measured in our laboratory. The dataset comprised of 3D positional data obtained using 55 reflective makers and a 3D motion capture system during a 10m overground walk. This dataset is now available online as part of the AIST Gait Database. The AIST Gait Database site is currently only available in Japanese but please contact “” for assistance in English. We used a principal component analysis (PCA) to identify sex and age effects on walking patterns in the data. PCA can help identify waveform-features from continuous data specific to certain groups, where previous studies disregarded large amount of data and only investigated selected variables at discrete time points. In addition, the waveforms can be reconstructed from the scores of the principal component vectors (PCV), which enabled us to classify a range of different gait patterns. Using this analysis, we identified 6 PCVs which explain more than 5 % of the total variance in the data as shown in Figure 1. Of these, we found a significant interaction between sex and age on PCV 1 and a significant effect of sex on PCV 6, which indicates that these PCVs contain sex differences in the walking patterns. An animation of reconstructed gait with amplified sex differences can be seen in Figure 1 [figure 1(a): PCV1 and figure 1(b): PCV 6].

Our findings advance the understanding of the nature of human gait. We identified clear sex differences in walking patterns, and showed that some of these patterns are affected by ageing while others are not. We believe that these finding are applicable to various health-related services. For example, we can now express gait features of an individual as a score and compare it to a reference group based on the current study’s PCVs. This information might be essential for optimising gait interventions and tracking changes over time. We are now focusing on launching new gait characteristics assessment services for healthy people based on the results of this study. 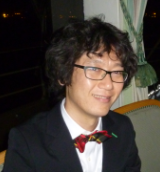 Yoshiyuki Kobayashi Ph.D. is a Senior Research Scientist at Digital Human Research Group, Human Informatics Research Institute, National Institute of Advanced Industrial Science and Technology. The goal of his research is the prevention of falling during latter stage of one’s life. To achieve this goal, he is now working with various private companies in Japan to build a system to describe and feedback the gait features of users.