It’s never too late! Responses to trips and slips can be regained in older adults

How can we avoid a fall at the critical moment of a trip or slip? Many falls experienced by older adults living in the community happen when they are walking and are due to an unexpected trip or slip. Previous studies have shown that older adults quickly improved their balance response to a perturbation when the same perturbation was repeated. However, the perturbations used in these experiments were somewhat predictable and slightly different from what might happen in real life. For example, the perturbations were always at a same location, the ankle was artificially pulled backwards by a cable, or the treadmill belt was accelerated rapidly. To overcome predictability and more realistically replicate unexpected trips and slips while walking, we designed and purpose-built a Trip and Slip Walkway. On that walkway, participants have to consistently walk at their usual pace (following a metronome) and are unable to predict the type (trip or slip), location (left or right, near, middle or far) and timing of the perturbation. In the current study, we evaluated whether older adults could learn to recover balance when they were tripped and slipped repeatedly.

Forty-four people aged 65-90 years and without neurological diseases participated in our study. Participants were randomly allocated to intervention or control groups. Intervention participants (n=22) practised a total of 30 trips and 30 slips while secured in a safety harness in three sessions over one week. These trips and slips were predictable at the beginning but eventually became unpredictable by randomly changing their locations along a 10m-long walkway. The control participants (n=22) simply walked on the walkway without experiencing perturbations in a single session. During the final assessment which involved trips and slips at unpredictable locations and timing, the intervention participants experienced 60% fewer falls compared with the control participants. Three-dimension kinematic analysis showed that the intervention group had less trunk sway and a more stable centre of mass during a trip or slip.

Our research found that the response to trips and slips can be improved with repeated practice in older adults. This type of repeated practice may become a new form of exercise training to prevent falls in the future. Because this perturbation training only required a few sessions, it could also be easily integrated into existing strength and balance exercise programs. We are continuing this line of research so that we can answer research questions such as:  ‘how long does the training effect last?’, ‘Is it effective to prevent falls in real life?’ and ‘Is it effective in people with neurological diseases too?’.

Figure. The experimental set up of the Trip and Slip Walkway 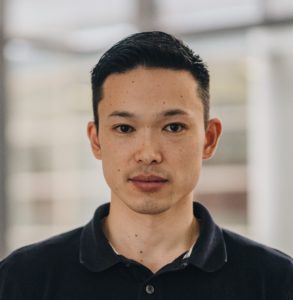 Yoshi is a Postdoctoral Fellow at Neuroscience Research Australia and a Conjoint Lecturer at UNSW Sydney. He is studying how we can prevent falls and injuries through exercise interventions with a focus on stepping and reactive balance training. He led the development of the Trip and Slip Walkway.

Evaluating Brain Speed in the Clinic: The Inner Jedi’s Influence on Gait and Balance