On a daily basis, individuals are constantly required to avoid another moving person in order to avoid a collision. Successfully avoiding a potential collision requires both walkers to mutually adapt their speed and orientation. The metric, Minimum Predicted Distance (MPD) has been used as a predictor variable in order to determine the risk of collision over time between two adult walkers. We were interested in determining whether MPD could be used to predict future risks of collisions between middle-aged children and adults.

Eighteen middle-aged children (mean±SD=10±1.5years) and eighteen adults (34±9.6years) walked at their normal pace, along a 12.6m pathway while avoiding another individual (child or adult). Three adults and three children were recruited per session. The study consisted of four obstructing walls (2.3m long), 90° to one another acting as barriers, such that participants were unaware who they were interacting with until they reached a steady walking speed. Each adult interacted with another adult 20 times, each child interacted with another child 20 times, and each adult interacted with a child 21 times. Motion capture of each participant’s head was recorded. The location of each participant’s head at each point in time was used to compute MPD and the walking speed of each participant. MPD(t) represents the progression of the distance between the two walkers if both walkers did not change their speed or path orientation at that instant in time. Trials were categorized as adult-adult, child-child, adult-child passing second, and child-adult passing second for statistical analysis.

The results of this study demonstrated that MPD(t) can be used to predict a future collision in children. When a child was involved in an interaction, MPD(t) was always lower compared to when two adults were interacting, with the lowest progression of MPD(t) being when two children interacted with one another. This is likely due to the differences in body size of the individuals. Since MPD(t) is an absolute measure, it does not consider body anthropometrics. Similar to previous collision avoidance research, the walker passing second, even when it is a child, contributes more to avoidance behaviour compared to the walker passing first. Therefore, the findings from the present study demonstrate that middle-aged children are capable of making adult-like decisions during a collision avoidance task involving two walkers. MPD is smaller in children compared to adults which may be due to person-specific characteristics or developmental changes. Body anthropometrics/characteristics should be considered when determining collision avoidance strategies between children and adults. 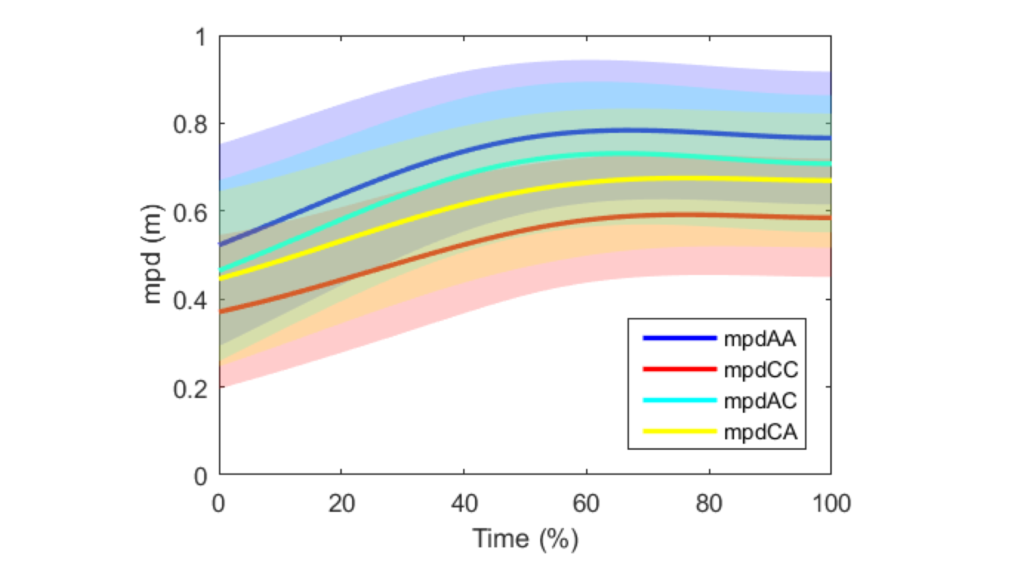 Figure. Mean evolution of minimum predicted distance (MPD(t)) over time for each group. In other words, the predicted distance two walkers would avoid one another if no adaptation to their behaviours occurred at each time point (i.e., 100% is the final crossing distance) Interactions were separated into adult-adult (AA), child-child (CC), adult-child passing second (AC), and child- adult passing second (CA).(Figure revised from Rapos et al., 2019).

Victoria completed her Master of Kinesiology degree at Wilfrid Laurier University exploring adaptive locomotion strategies between middle-aged children and young adults. Currently, Victoria is in her first year of her PhD at Wilfrid Laurier University, working with Dr. Michael Cinelli and plans on investigating collision avoidance strategies in middle-aged children.