We regularly move our eyes searching for visual information, and when we do this, postural adjustments are necessary to compensate or facilitate these movements. Previous studies in young adults show that body sway is attenuated during saccadic eye movements and reveal that challenging stances affects this relationship. This suggests that in an attempt to increase visual stability to perform more spatially accurate saccades, people limit their body sway during saccadic eye movements. The eye-posture relationship appears to be affected by the aging. Older adults have slower and less accurate saccadic eye movements and exhibit more sway during postural tasks compared to young adults. These changes in gaze and postural behaviors might be associated to increase of falls in older people. We aimed to investigate the influence of saccadic eye movements on postural control in older adults by manipulating the difficulty level of visual and postural tasks.

Twelve older adults were asked to maintain quiet upright standing during two stance conditions (wide or narrow stance) combined with three gaze conditions (fixation, saccades at 0.5 Hz, or saccades at 1.1 Hz). The target in the gaze conditions was a red circle on a white background, which either stayed in place or jumped horizontally to elicit saccades. We found that the mean amplitude of mediolateral head and trunk sway was higher and sway frequency was lower at narrow compared to wide stance condition. In anteroposterior direction, the mean amplitude of sway was lowest at saccades at 1.1 Hz, followed by saccades at 0.5 Hz, with highest values during the fixation condition, following a linear trend. A similar trend was observed for the frequency of head and trunk sway in mediolateral and anteroposterior direction, participants exhibited highest sway frequency at saccades 1.1 Hz, followed by saccades at 0.5 Hz, with lowest values in the fixation condition. 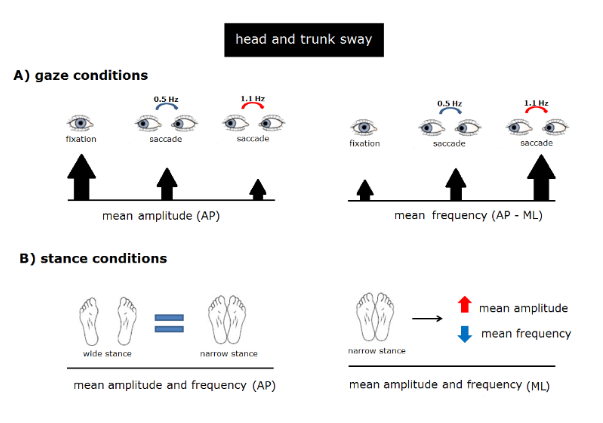 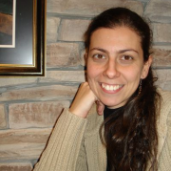 Paula F. Polastri is coordinator of the Laboratory of Information, Vision and Action (LIVIA) together with Sergio T. Rodrigues. Currently, their research focuses on understanding the relationship between gaze and postural control. Their further study interests are to investigate how the changes in the eye-posture relationship affect the coupling between sensory information and body sway.