Assessment of free-living gait is becoming increasingly popular in mobility and fall-risk research because of its ecological validity and advances in sensor technology. However, an essential step herein is detecting when someone is walking, which is not as easy as it seems. Previous studies have reported boundaries in separating gait from other activities as shuffling and standing still. Furthermore, inaccurate and instable placement of a sensor were described as difficulties for proper gait detection, even though these factors are hard to avoid when older adults wear sensors without supervision. Therefore, we set up a study to develop an algorithm for reliable gait detection from inertial sensors without the need for rigid sensor placement.

Fifty-one older adults with an average age of 83 years wore the Philips Senior Mobility Monitor, containing a triaxial accelerometer and a barometer, on a lanyard around their neck. We randomly placed the device underneath or outside clothing and changed the length of the lanyard between participants to mimic real-life variations. While being filmed, participants walked in a semi-controlled environment and performed free-living activities such as climbing stairs and sit-to-stand transfers. We annotated bouts of level-ground gait (excluding shuffling) in the videos as gold standard. To differentiate gait from other activities, we developed a wavelet-based decision tree algorithm.  Data of half of the participants was used to optimize algorithm thresholds (e.g. minimal number of heel strikes), while data of the other half of the participants was kept for validation. Subsequently, the algorithm was used to detect walking episodes in the sensor data of the validation group, which strongly corresponded to those annotated in the videos with high accuracy (≥97%) and low false-positive errors (≤1.9%) (Fig. 1).

To identify whether gait parameters from free-living gait were related to standardized laboratory-assessed gait parameters, we calculated the median and maximum cadence from the inertial sensor data and compared those with cadence obtained from three walks on a 10-m GaitRite walkway. We found that median and maximum cadence were strongly correlated with cadence measured on the GaitRite. Despite this strong correlation, median cadence was significantly lower in free-living gait compared to cadence measured on the GaitRite.

Our novel wavelet-based method is feasible for detecting free-living gaits from a pendant-worn inertial sensor. Giving the fact that the exact location of the sensor differed between participants and could even change during the experiment, this method is promising to detect gait in the home environment. As laboratory gait parameters where related to, but more equal to someone’s ‘best’ free-living gait parameters, home assessments have the potential to provide additional information for investigating daily performance. 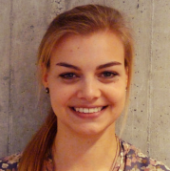 Milou is highly interested in using novel techniques to understand the mechanisms underpinning balance problems due to ageing and disease. Currently, she is using non-invasive brain stimulation and brain imaging techniques to investigate the neural control of postural balance and how this might be altered after brain damage.