Multiple balance mechanisms to keep you upright while split-belt walking

Humans are unique in their gait, as they walk on two legs instead of four. While two-legged gait is energy efficient, it comes with a higher chance of balance loss. The center of mass is higher and the base of support smaller in bi- versus quadrupedal gait, which is a challenge in balance control. However, this does not seem to pose a problem for healthy humans, as they effortlessly walk in ever-changing environmental circumstances (e.g. while twisting and turning or walking over uneven terrain). If gait control is impaired (e.g. due to injury), this adaptability declines. Knowledge on how people control their balance during constant spatiotemporal perturbations is still scarce. However, this knowledge may be crucial for gait rehabilitation. Therefore, we studied how people adapt their balance to a continuous perturbation as imposed by walking on a split-belt treadmill, where people walk faster with one leg than the other.

We assessed fourteen healthy young adults during fast (1.4 ms-1) and slow (0.7 ms-1) walking at baseline, during adaptation to a split-belt condition (1.4 : 0.7 ms-1), and during a de-adaptation (0.7 ms-1) phase. We calculated step width, mediolateral margins of stability, and mediolateral foot roll-off from force plate signals to quantify balance control. While step width did not change, the margins of stability and foot roll-off adapted to maintain dynamic balance during the split-belt perturbation. Furthermore, as Fig. 1A shows, the margins of stability and foot roll-off were strongly coupled during split-belt adaptation. This implies that if the margin of stability increased, the foot rolled off more inwards, and vice versa. In addition, this coupling adapted to split-belt gait, as observed in the change from the start (Early Adaptation) to the end of the adaptation phase (Late Adaptation) in both legs (Fig. 1B).

Relative foot placement and foot roll-off cooperate to maintain dynamic balance during perturbed walking. In addition, these coupled mechanisms show adaptation to split-belt gait. This implies that multiple spatiotemporal mechanisms are involved in maintaining dynamic stability. The finding that the margins of stability changed, while step width did not, implicates an influence of temporal control of gait on balance control through passive dynamics. Similar processes may induce altered balance control in persons with inherent spatiotemporal gait asymmetries, e.g. amputees and stroke survivors. Future research should determine whether changes in the margins of stability and foot roll-off are the result of an active balance control strategy, or the result of passive dynamics in gait. 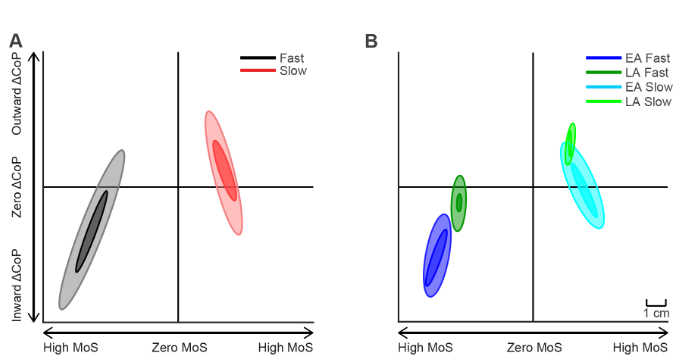 Figure 1 – The relation between mediolateral Margin of Stability (MoS) and mediolateral foot roll-off (ΔCoP) during the split-belt adaptation phase. The shaded outer ellipses indicate standard error of the group’s mean (N=14). (A) The black ellipse shows the leg on the fast belt and the red ellipse the leg on the slow belt. (B) The blue ellipses show the fast (darker) or slow (lighter) leg during Early Adaptation (EA), the green ellipses during Late Adaptation (LA). This figure shows that a higher margin of stability is related to a more inward foot roll-off during stance, and vice versa. This relation shifts from a high MoS and inward foot roll-off to low MoS and neutral/outward foot roll-off from early to late adaptation. 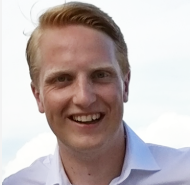 Tom Buurke is a PhD student at the Center for Human Movement Sciences, University of Groningen in the Netherlands. He is interested in the biomechanics and motor control of human gait. Tom’s PhD research focuses on locomotor adaptations and dynamic balance control on the split-belt treadmill.

Can we stop older people from falling if we teach them how to step?

How do stroke survivors avoid obstacles when walking through a narrow opening?