People with Parkinson’s disease (PD) fall more frequently than healthy individuals. Most falls in this clinical population are caused by tripping over obstacles. In order to walk safely through cluttered environments, people need to see and recognize which obstacles might cause a trip and which places are safe to step. As such, if people experience difficulties to sample visual information from the environment, this might be a contributing factor to tripping and falling.  Previous research has shown that maladaptive gaze strategies used by older adults contribute to inaccurate feet placement to meet environmental demands during adaptive walking and increase the risk of falling. As part of the current study, we wanted to investigate whether this would also apply to people with PD.

We asked people with PD and healthy individuals to walk along a pathway with foot placement targets (two conditions: one vs. two targets) while wearing a gaze tracker unit. Participants were instructed to place each foot accurately in the central area of the targets. Outcome measures included absolute error (accuracy) of foot placement onto the first target and the time interval between the gaze transfer away from the first target and foot contact on the same target. This protocol allowed us to determine the timing relationships between participants’ eye and stepping movements during target-directed gait. When there was a single target in the travel path, both groups fixated the target until after foot contact on the target. When challenged with an additional target, both groups transferred their gaze from the first target prior to foot contact (Fig. 1A). Interestingly, only people with PD decreased the accuracy of anterior-posterior foot placement onto the first target when there was more than one target in the pathway (Fig. 1B). Premature gaze transfer was associated with decline in stepping accuracy in people with PD only.

These findings suggest that both people with PD and healthy individuals prioritize the planning of future actions over the execution of ongoing steps (Fig. 1C). Adoption of this strategy (i.e. early gaze deviation from stepping location), which is associated with loss of accuracy of stepping movements, may contribute to an increased likelihood of trips and falls in people with PD. Additionally, our findings support the notion that people with PD are more dependent on visual feedback in order to guarantee accurate foot placement in a desired stepping location. Thus, improving visual/gaze strategy (i.e. fixating the stepping location until after the foot had landed) should be a new target for interventions.

Figure 1: Time between gaze transfer and heel contact in the first target (A); a: indicates significant difference between conditions (one vs. two targets) for both groups. Anterior-posterior foot placement error (B); b: indicates significant difference between conditions for people with PD only. Illustration of tripping caused by an inappropriate early gaze deviation from the first of two obstacles in the pathway (C). 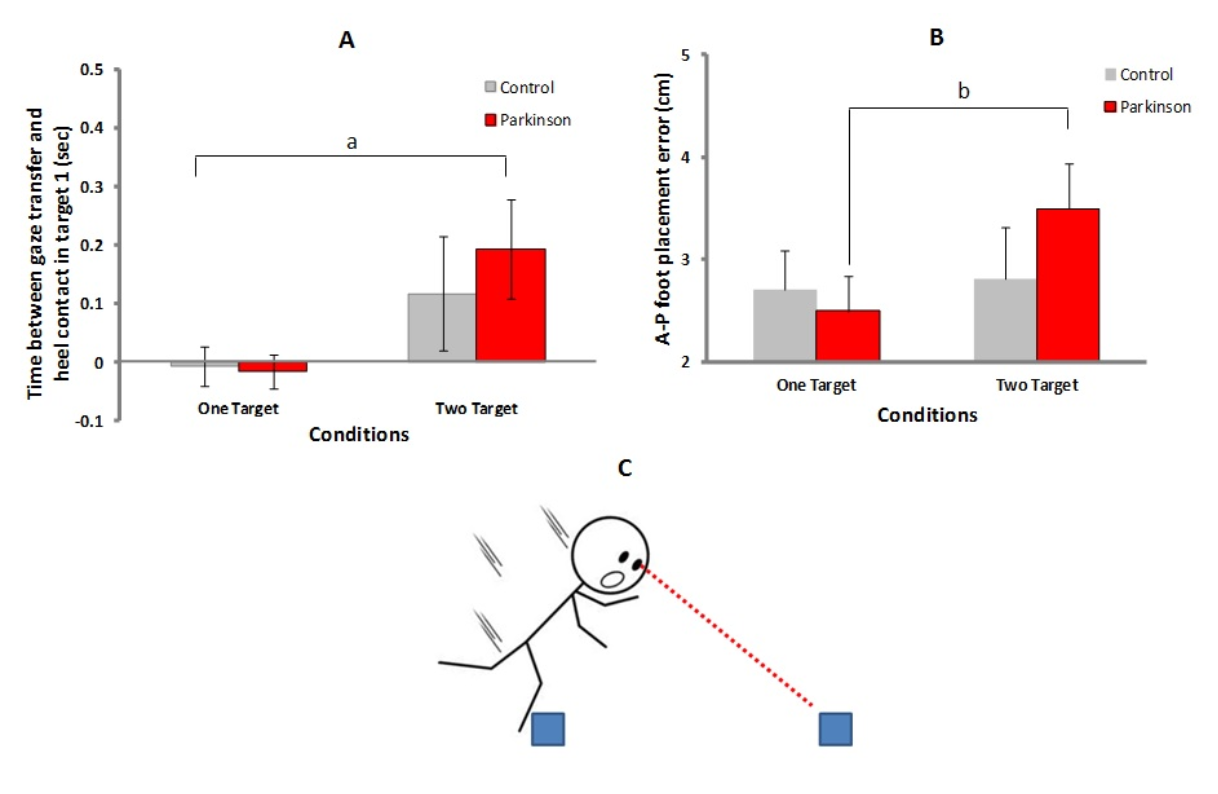 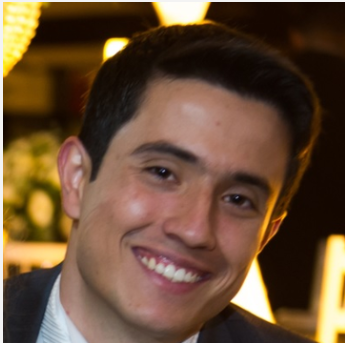 Rodrigo Vitório is a post-doctoral fellow at Sao Paulo State University supported by Sao Paulo Research Foundation. He is currently investigating the effects of aging and Parkinson’s disease on brain cortical activity during complex walking, using both EEG and fNIRS technologies.