In humans, gait initiation is particularly challenging for motor and postural control. While standing on only two legs, we have to move our whole body forward and pass from a (relatively) stable (double leg stance) to an (very!) unstable position (single leg stance). This process is associated with anticipatory postural adjustments (APAs). The neural substrates for generating these APAs and initiating a step are not fully known. By applying repetitive transcranial magnetic stimulation (rTMS), we can manipulate APAs. Previous research showed that rTMS applied above the supplementary motor area provokes a shortening of the APA duration of the first step with no change in APA amplitude and rTMS applied over the cerebellum affects spatial characteristics of walking during locomotor adaptation. This study extends this research further by looking at the effects of supplementary motor area and cerebellar stimulation on the generation of APAs and gait initiation.

We selectively disrupted the supplementary motor area and cerebellum with continuous theta burst rTMS (cTBS, 600 stimuli, three-pulse bursts at 50 Hz, repeated every 200 ms continuously for 40 s-5 Hz) and evaluated the effects of the stimulation on the APAs and execution phases of gait initiation. We recorded biomechanical parameters of gait initiation and EMG activity of the lower leg muscles in 22 healthy volunteers. Our volunteers were instructed to walk at their usual self-paced speed for 10 trials before and after rTMS. They performed separate sessions in a randomised order for rTMS over the supplementary motor area, cerebellum and sham stimulation (to either supplementary motor area or cerebellum), the sessions being separated at least 7 days. We found that functional inhibition of the supplementary motor area led to a shortened APA phase duration with advanced and increased muscle activity. During execution, it also advanced muscle co-activation and decreased the duration of stance soleus activity. Functional inhibition of the cerebellum on the other hand did not influence the APA phase duration and amplitude. During execution, it did increase muscle co-activation and decreased execution duration with increased swing soleus muscle duration and activity. Neither SMA nor cerebellar functional inhibition provoked significant changes in the step length and velocity or postural control during gait execution (i.e. double stance duration and braking index).

The results support distinct roles for the supplementary motor area and the lateral posterior cerebellum in human gait initiation. The supplementary motor area is important for the timing and amplitude of the preparatory phase of the gait initiation, and the posterior cerebellum contributes to the inter- and intra-limb muscle coordination, and probably coupling between the APAs and the execution phases. This study enhances our understanding of how the cortico-pontine-cerebello-thalamo-cortical pathway contributes to the preparation and the execution of the first step in humans. 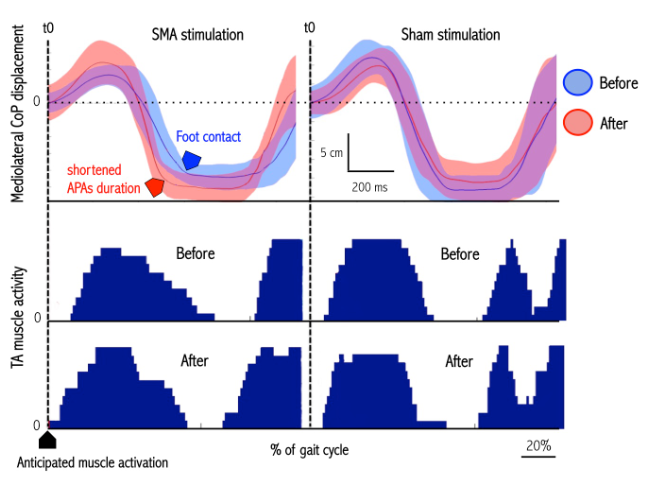 Figure – Effects of cTBS SMA and sham stimulation on gait initiation in an individual subject. Note that after SMA stimulation (left panel) the duration of the anticipatory postural adjustments phase (delay between t0 and FC) decreased with an advanced TA muscle activity. Such is not the case after sham stimulation (right panel). 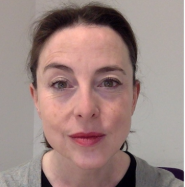 Professor of Medicine, Chair of Physiology at Rouen-Normandie University

Marie-Laure Welter is Professor of Medicine, Chair of Physiology at Rouen-Normandie University, and head of the Neurophysiology Unit at the University Hospital Rouen-Normandie (France).  Her research program is devoted to the understanding of the pathophysiology of complex movement disorders, such as Parkinson’s disease, essential tremor or dystonia, at the Brain and Spine Institute-French National Institute of Health and Medical Research (ICM/INSERM) . Her overarching aim is to identify new therapeutic targets, especially in the field of functional neurosurgery and gait and balance disorders, with a combined clinical and electrophysiological approach.