With the evolution of bipedal posture humans are not immune to falls. Falls are a significant societal burden, being a leading cause of morbidity and mortality, especially in people aging with disabilities such as stroke. A fall after encountering a large external disturbance to the body, such as a slip or a trip, can be effectively prevented via successful protective (reactive) self-defence strategies. Such strategies include grasping and stepping, and essential re-establish the relationship between the body and the base of support, which could be displaced based on the direction of the disturbance. While earlier it was thought that such protective postural responses were primarily automatic, and initiated and controlled reflexively within the spinal cord, emerging evidence indicates that the brain has an important role to play in modulating these responses. In the healthy nervous system, this modulation can be seen in the form of rapidly and appropriately adjusting and adapting the protective response based on the perceived threat (e.g. adjusting step length based on the magnitude of the disturbance). Our study examined if age-related structural (mainly degenerative) changes in the brain would impacted this modulation, and if the magnitude of this impact would be enhanced when an additional brain injury, such as stroke, co-existed with normal aging.

Young healthy adults, older healthy adults, and chronic stroke survivors were exposed to slip-like perturbations while they were standing on a motorized instrumented treadmill. The perturbations induced a balance loss much like what you would experience while standing on a bus that started to move suddenly from a standstill. Participants were tested on three levels of difficulty, which consisted of increasing acceleration levels of the treadmill belt. All subjects resorted to taking a protective step to restore their balance, even at the lowest level of belt acceleration. There were no falls in the young and the healthy older adults, but the number of falls increased with increasing acceleration level in the stroke participants. The number of steps taken to restore balance increased with increasing difficulty levels in all groups. The young subjects were able to increase control of their center of mass (COM) stability with increasing acceleration levels. This was achieved by increasing the length of their protective step (spatial parameter) along with decreasing their step velocity (temporal parameter), rather than altering the control of their trunk (upper body) movement. While older adults were able to alter their responses with an increase in stability between the lower difficulty levels, they could not scale their spatial and temporal stepping response to the highest level of acceleration. Stroke participants on the other hand could not modulate COM stability, step length, or step velocity with increasing difficulty levels, which could explain the highest number of falls in this population.

An accurate sensory perception of the perturbation (in terms of displacement and velocity) is required to generate a timed and graded response to initiate and execute an appropriate body response. Our results demonstrate a partially preserved ability to efficiently respond to challenging environmental threats by modulating the reactive balance response in older adults, which breaks down as the magnitude of threat increases. Such modulatory ability is significantly impaired in people aging with stroke, which could be one of the factors explaining the 3-fold increase in fall risk in this population compared to their healthy counterparts. Results from this study suggest that reactive balance assessment measures could miss detecting community-dwelling older adults at risk of falls if these tests at conducted at lower “threat” levels. Furthermore, our results suggest that fall prevention paradigms for people aging with and without neurological disorders, such as stroke should, should include reactive balance training at progressively increasing levels of perturbation threat to entrain modulation of protective stepping responses. 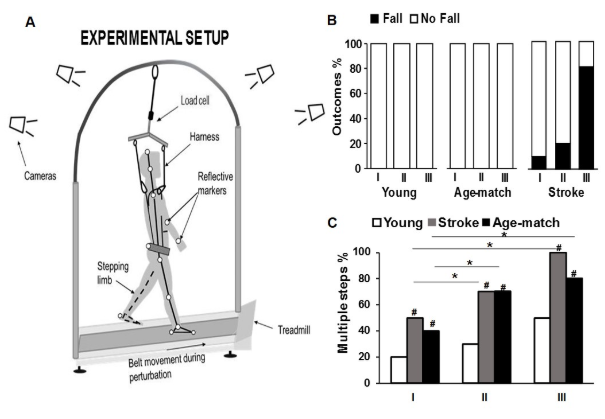 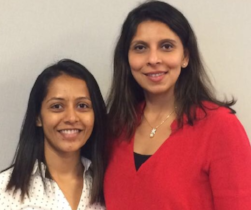 Department of Physical Therapy, University of Illinois at Chicago,

Dr. Bhatt is an assistant professor in the department of physical therapy and leads the Cognitive, Motor & Balance Rehabilitation (CogMoBal) Laboratory. Her research involves investigating the neuromechanical basis of balance recovery from external perturbations such as slips and trips, and subsequently designing intervention paradigms for reducing fall-risk in healthy and pathological populations. Her research interest and focus also lays in examining effects of alternative cognitive and motor therapies for improving impairment, function, and community participation in community-dwelling people with neurological disorders.

Prakruti Patel is a graduate student in Dr. Bhatt’s lab. Prakruti will graduate with her doctoral degree in Rehabilitation Sciences in Spring 2017. Her dissertation focussed on examining cognitive-motor interference in for locomotor-balance tasks in people with aging and stroke.