Walking upright on two legs is a unique human trait and sets us apart from other animal species. The problems of controlling bipedal gait can be fully appreciated when trying to play the web-based game QWOP.  The aim of the games is to move a runner forward by moving its legs. Most tries however, will result in a fall within one step, which illustrates how complex bipedal gait is.

In order to understand the importance of higher levels of the central nervous system in controlling gait, and in particular gait stability, we designed an experiment in which we measured kinematics and brain activity using ElectroEncephaloGraphy (EEG), while our (human) subjects walked on a treadmill. The aim was to see whether we could detect a difference in brain activity while subjects walked in two different conditions. In one condition, the subjects were stabilized (see Figure 1a) and in a second condition, the subjects walked freely. We were particularly interested in activity in the so-called beta band (oscillations around 18-30Hz), as an increase in motor control has been associated with a decrease in beta band activity. Differences in beta activity between normal and stabilized gait were mostly present in the premotor cortex, and primarily in the left premotor cortex. Around the contralateral push off phase, there was an increase in beta activity during the stabilized walking condition.

Our experiment confirms the role of cortical areas in the control of human gait stability. In particular, the difference in beta activity suggests an important role for push off in controlling gait stability. Moreover, the fact that gait stability is in part controlled at cortical levels, suggests that interventions to improve gait stability could also be aimed at modulating the activity of these areas, for instance by means of transcranial direct current stimulation.

Figure 1: Experiment to study the importance of higher levels of the central nervous system in controlling gait stability (A) Set-up used to externally stabilize participants (B) areas showing a significant difference in beta power between normal and stabilized walking (orange), and the probability map of the premotor cortex (blue) (C) Normalized beta power of the left premotor area was higher in stabilized walking (red) as compared to normal walking (blue) in late stance (around 0, 50 and 100% of the cycle). Note that higher beta power implies reduced control by the area involved. 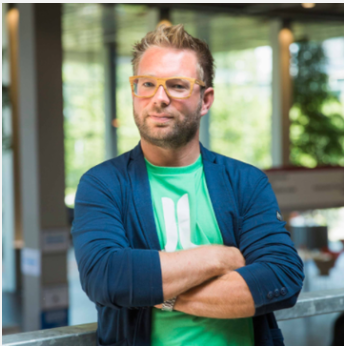 Sjoerd Bruijn’s main research interest is how humans are able to walk on two legs so well. His research is focussed on developing and validating novel gait stability measures, and using these measures, combined with behavioural and neurophysiological (EEG, fMRI, DTI) measures to understand how it is that humans are able to walk on two legs. While his work is mostly fundamental in nature, he also applies the fundamental insights obtained to study how gait stability can be improved in different patient populations and elderly.