Turning on slippery floors: a new approach to assess dynamic postural stability based on misalignment of the desired and actual center of pressure

Preventing falls is one of the major challenges of our ISPGR community. As part of addressing this challenge, the dynamic postural stability of human gait has been attracting attention from many researchers. When slippery or uneven surfaces cause a large balance perturbation during gait, such as a slip or trip, current postural stability measures indicate whether postural stability is maintained. They do not, however, indicate the degree of instability. In this study, we introduced a desired center of pressure (dCOP) to assess the degree of dynamic postural instability. The dCOP is defined as a virtual point on the ground where the moment around the body center of mass (COM) becomes zero, which occurs when the dCOP and the measured COP (mCOP) coincide. We hypothesized that, when the misalignment of the dCOP and mCOP (dCOP-mCOP) increases to a certain value due to a large perturbation, it becomes difficult to take the reactive step necessary to recover balance and continue walking. The objective of this study was to test this hypothesis in healthy participants during an induced slip while turning.

Twelve healthy young adult males participated and were asked to: 1) walk straight and turn 60 degrees to the right with the right foot (spin turn) on a dry surface, and 2) walk straight and perform a 60-degree spin turn to the right on a slippery surface. The dCOP-mCOP during turning in the slip trials was significantly larger in trials where a fall occurred compared to the no-slip trials and slip trials where balance was maintained. This was particularly the case in x-direction (i.e., the medial-lateral direction during forward gait). The receiver operating characteristic (ROC) analysis indicated that the dCOP-mCOP in the x-direction was a good indicator of fall risk due to a slip during turning (area under the curve, AUC =0.93). The threshold of dCOP-mCOP in the x-direction for distinguishing trials at risk of a fall from those at no risk of a fall was 0.55 m. 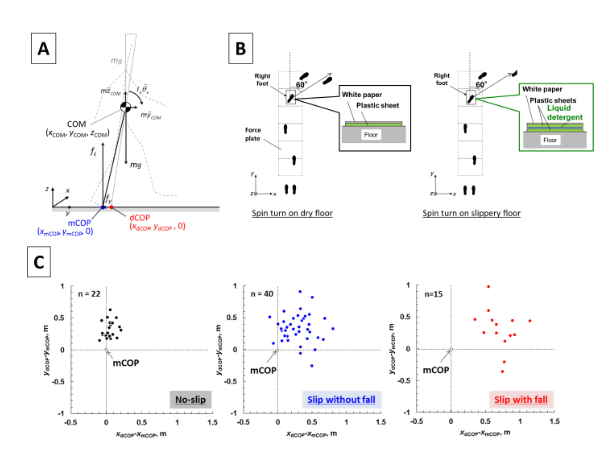 Figure: A) Inverted pendulum model and the desired center of pressure (dCOP) in the sagittal plane. B) Experimental set-up and movement instruction: 1) straight walk and 60-degree spin turn on the dummy sheet, and 2) straight walk and 60-degree spin turn on the slippery sheet. C)Relative location of dCOP with respect to mCOP for spin turn trials. The origin corresponds to the location of mCOP, and each plot indicates the dCOP location relative to the mCOP at which the dCOP–mCOP took the largest value in each trial.

Our study shows that participants were not able to recover walking by taking a successful reactive step after slipping when the dCOP-mCOP reached a certain value, particularly in the x-direction. Furthermore, we were able to differentiate between successful and unsuccessful recoveries using our dCOP-mCOP concept. These results indicate the feasibility of our dCOP concept in assessing the risk of fall due to an induced slip during turning. The misalignment of dCOP and mCOP may provide insight into the variability of gait parameters such as the step length and width of older adults or patients with movement disorders. The dCOP could also yield insight into the desired foot placement for stable gait and contribute to the development of fall prevention interventions. 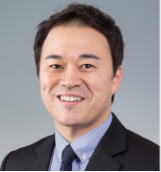 Takeshi Yamaguchi is an associate professor at the graduate school of engineering and graduate school of biomedical engineering, Tohoku University. His primary research interests involve the tribology of the shoe and floor interface and biomechanics of gait with the goal of finding ways to reduce slips and fall accidents.