Speeding up during gait :The workings of our neuromuscular transmission system

Both animals and humans can change their gait speed over a wide range to suit the situation. The coordinated locomotor muscle activity among various speeds is mainly generated by the spinal central pattern generators (CPGs). Recent animal studies have demonstrated the following two characteristics of the speed control mechanisms of the spinal CPGs: (i) rostral spinal segment activation is essential to achieving high-speed locomotion; and (ii) different spinal neural modules are sequentially activated with increasing speed. To examine whether similar control mechanisms exist in the spinal cord of humans, we estimated spinal neural activity during varied-speed locomotion from surface electromyographic (EMG) signals.

We recorded EMG activity from 14 lower leg muscles during a range of speeds (from very slow walking [0.3 m/s] to fast running [4.3 m/s]). We estimated spinal neural activity by mapping the EMG activations onto the estimated location in the spinal cord based on innervation relationships between muscles and spinal segments (Fig. 1A-2). We then broke down the spinal activities into fundamental units of the activity generated by each locomotor module (i.e., muscle synergy) (Fig. 1A-3). We found that the reconstructed spinal activity patterns were divided into the following three patterns depending on the locomotion speed: slow walking, fast walking and running (Fig.1B, the first column). During these three activation patterns, the activity in rostral segments was more increased than that in caudal segments as speed increased. Additionally, the different spinal activation patterns were generated by distinct combinations of locomotor modules (Fig.1B, second and subsequent columns). Most modules newly recruited in fast walking and running were activated by the upper lumbar segments. 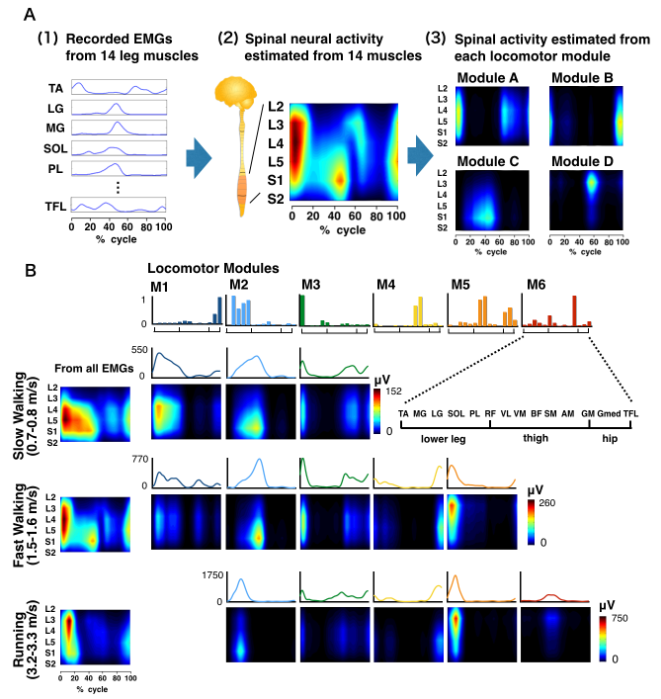 Figure 1. (A) Procedures of reconstruction of spinal activity patterns from surface EMG signals. (B) Reconstructed spinal activity patterns (the first column) are divided into several locomotor modules (second and subsequent columns from the left) at slow walking, fast walking and running. The locomotor modules were obtained by non-negative matrix factorization method. Muscle weighting component (top bars) and its corresponding temporal pattern component (the same color waveform) for each locomotor module is also shown in the figure.

To summarize the results, we found the following spinal activation patterns regarding speed control of human locomotion: (i) spinal activity in the rostral segments increased compared with the caudal segments with increasing locomotion speed; and (ii) the different spinal activation patterns recruited distinct combinations of locomotor modules. These results are consistent with the speed control characteristics of vertebrate CPGs. This commonality supports a hypothesis that basic locomotor neural circuits are highly conserved among in humans, mammals, and birds over vertebrate evolution. Our results provide fascinating insight into not only human locomotor control but also the evolution of vertebrate locomotion. 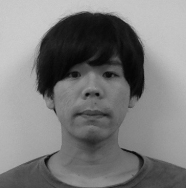 Department of Life Sciences, Graduate School of Arts and Sciences, The University of Tokyo

His research interests are the neural control mechanisms of locomotion in humans. He is currently studying on the cortical control of locomotor muscle activity using machine learning and electrophysiological techniques.