Sing for Your Saunter: Self-Generated Cues to Enhance Gait in Parkinson Disease

People with Parkinson disease (PD) often report difficulty walking as an early and troublesome problem.  Emergence of gait problems is considered a red flag indicating onset of disability, and can contribute to reduced quality of life.  Gait in people with PD is often slower, with reduced stride lengths and increased variability that may be attributed to loss of ability to maintain a steady gait rhythm.  To address this loss of rhythmicity, many studies have employed use of external rhythmic cues, such as music or a metronome, to help stabilize gait.  However, we know very little about the impact of self-generated rhythmic cues, such as singing, on gait.  The goal of this study was to test the feasibility of singing during walking in people with PD, gathering preliminary evidence regarding the efficacy of this novel cueing technique.

Twenty-three people with Parkinson disease participated.  Each person walked at their normal, comfortable pace for the Baseline condition, which was used to determine preferred walking cadence.  Cue rate, or beats per minute of the song, was then set to match preferred cadence.  Participants then walked in three cued conditions and a dual task condition (see Figure).  When walking to music, participants maintained velocity but increased spatial and temporal variability.  Variability was further increased when participants walked while singing along to music.  Singing in the absence of music, however, did not increase variability.  In contrast, when dual tasking (i.e. completing a word generation task while walking) participants showed reductions in velocity along with large increases in variability.

Of all the conditions tested, singing was the only cue condition that did not result in increased variability.  We think that matching a self-generated rhythm may facilitate rhythmicity more than matching an external cue.  Future work should explore use of faster cueing rates and use of mental rather than overt singing, in addition to determining the utility of singing during walking in everyday, real-world situations. If singing continues to hold promise in future studies, this could represent a substantial advance as singing is universally available, inexpensive, and adaptable.

The ISPGR blog applies Creative Commons Attribution (CC BY) license to figure and text of the article. 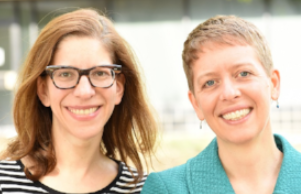 Dr. Earhart is Professor and Director of the Program in Physical Therapy at Washington University in St. Louis.  Her research focuses on the neural control of movement in health and disease, with an emphasis on postural and locomotor control in Parkinson disease.

Elinor Harrison is a professional performance artist turned graduate student.  She is working toward completion of a PhD in Movement Science.  Her dissertation focuses on the use of singing as a means to facilitate movement in people with Parkinson disease.