How and when does postural prioritization happen during stepping? A novel dual task approach

During daily life, locomotion tasks are often accompanied by a concurrent task such as talking, texting or recalling a shopping list. There is a wide body of empirical evidence on the profound negative effects of concurrent cognitive challenges on gait, the cognitive task itself, and other clinical outcomes such as falls. Such reductions in performance are commonly interpreted as competition for attentional resources between the postural and cognitive task. Various cognitive tasks have been utilized in dual-task research, such as backwards counting, reaction time, memory recall, Stroop and verbal fluency tasks. Performance for these tasks is traditionally measured through the rate of error or the response time. However, such descriptive measures lack the temporal resolution to track the dynamics of attention allocation during postural control. Hence, we aimed to evaluate the timing of postural prioritization during stepping using a continuous finger-tapping task.

Ten healthy young adults with a mean age of 21 years participated in this study. Participants were asked to perform a rapid voluntary step with either their left or right foot after hearing an auditory tone (simple/choice reaction paradigm), while also tapping their right index finger continuously on a handhold numeric keypad (Figure A). Three variants of concurrent attentional tasks were used: (1) single task: holding keypad only, no finger-tapping; (2) low attention-demanding: one-button tapping task; (3) high attention-demanding: four-button tapping task. We performed wavelet analysis on the stimulus-locked finger-tapping data to determine the temporal change of tapping frequency related to reactive stepping (Figure B). Results showed that the postural performance was negatively affected only by the high attention-demanding task. Significant reduction of post-stimulus tapping speed was observed across all test conditions, indicating attention shift during the execution of a step. In addition, the high attention-demanding task induced early postural prioritization during the choice reaction stepping condition when different motor programs needed to be prepared and executed. 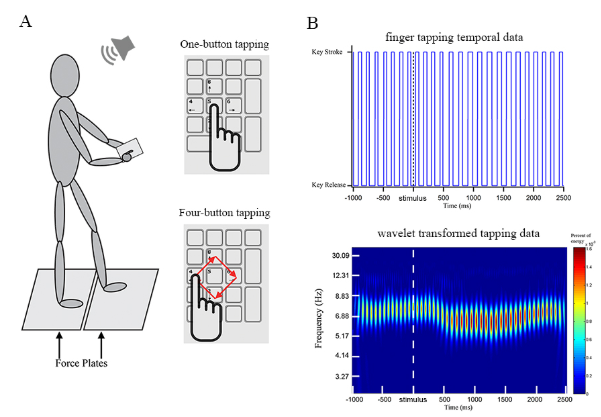 Our study shows that a continuous finger-tapping task can be used to track attention allocation during step initiation, by detecting the reduction of tapping speed in response to the stimulus presentation. The results suggest that the postural task is prioritized during step planning and execution, especially when the motor program cannot be pre-selected in case of the choice reaction condition. Our novel method can be used to probe when and how attention shifts during other locomotion tasks, as well as track attention allocation in various aging and pathological populations. 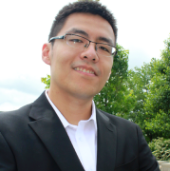