Being (un)moved by mental time travel

Humans have the ability to mentally visualize all sorts of objects, events or scenes. This is known as mental imagery. For example, I can generate a vivid experience of swimming in a pool: I ‘feel’ the water flow, I ‘sense’ the temperature, and I ‘move’ my arms and legs. Research has shown that mental imagery (especially of motor acts) is accompanied by changes in bodily states, such as heart rate, muscle tension, and respiration, often in a highly specific manner. Mental imagery also affects postural control, as evidenced by analysis of the center-of-pressure (COP) trajectory as a function of mental content. We performed an experiment inspired by a study by Miles et al. (2010). They found that mental imagery of the (own) future and past induced COP changes. Thinking of the past caused backward displacement of the  COP, whereas thinking of the future caused forward displacement. The authors concluded that the direction of subjective time is represented along a spatial dimension, which in turn led to directional changes in body posture (unintentional ‘leaning’). We performed a conceptual replication and extension of this study, in order to test how general and robust the effect of ‘mental time travel’ is.

Thirty-two participants stood upright and imagined various scenarios that were read aloud. Scenarios described a typical day in the past or in the future; 4 days or 4 years. In addition, some scenarios were pleasant (e.g., receiving a diploma) or unpleasant (being at a funeral). We analyzed postural displacements in the anterior-posterior direction, as a function of the mental content. An important finding was that there was no statistically significant difference between past and future imagery (see Figure). Also, no postural effects of emotion were found. This apparent null finding (all F’s < 1) received support from Bayesian statistics, which quantifies the relative predictive success of the null hypothesis relative to the alternative hypothesis. This Bayesian analysis revealed that the null hypothesis (i.e., no difference between past and future imagery) was 4.8 more likely than the alternative, which is typically considered ‘substantial’ evidence.

Figure 1. Grand averaged wave forms of the COP trace (bold line), plus straight line fit (red line) for past (left panel) and future (right panel) mental imagery. There was no statistical difference between these two conditions.

We have no explanation for why our results diverged from Miles et al. (2010). It could be due to subtle unidentified methodological differences. Alternatively, it could be that the effect is not robust and that posture is insensitive to abstract thought, such as mental time travel. 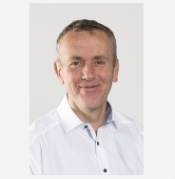 Dr. Stins is assistant professor at the Department of Human Movement Sciences, VU University Amsterdam. His research focuses on the interface of experimental psychology (especially cognition and emotion) and motor control, with an emphasis on the control of posture and gait.