‘Gazing into thin air’ – How is visual-search during gait impacted by a dual-task?

During walking, we rely on visual information to identify tripping hazards and navigate safely through the environment. The way we shift our gaze and scan the environment (our visual-search behaviour) is affected by ageing and fall risk. Older adults at high-risk of falling will transfer their gaze away from a stepping target before the step has been completed (i.e., prior to heel contact); a behaviour which is causally linked to reduced stepping accuracy. Moreover, when navigating a series of stepping constraints, high-risk older adults will adopt a less-variable pattern of visual-search, whereby their gaze is fixated predominately on the initial stepping target, at the expense of upcoming obstacles or targets. We hypothesised that this maladaptive and less-variable pattern of visual-search behaviour may be caused by inefficiencies in attentional processing, with high-risk older adults possessing insufficient cognitive resources to generate and store a ‘spatial map’ of their environment. Insufficient cognitive resources for attentional processing during walking may be due to psychological factors. When anxious or following injury or accident (e.g., falls), individuals may attempt to consciously monitor and control movements, which are usually considered largely ‘automatic’. This phenomenon is frequently described as ‘reinvestment’. It is believed that cognitive resources are required to consciously attend to the process of walking, which would limit the resources available for other processes, such as proactively scanning one’s environment. Yet, little is known about how either cognitive load or reinvestment influence visual-search behaviour during walking.

Younger adults traversed a non-linear path (containing two precision stepping targets) while performing a secondary serial-subtraction task and wearing a gaze-tracker unit. Outcome measures included gaze behaviour, stepping accuracy, and time to complete the walking task. When walking while simultaneously carrying out the serial-subtraction task, participants visually fixated on task-irrelevant areas ‘outside’ the walking path more often and for longer durations, and fixated on task-relevant areas ‘inside’ the walkway for shorter durations. These changes were most pronounced in high-trait-reinvesters. The increased task-irrelevant ‘outside’ fixations were accompanied by slower walking times and greater gross stepping errors. Interestingly, these ‘outside’ fixations were temporally related to the performance of the dual-task, with participants more likely to look away from the walkway (or, ‘gaze into thin air’) in the 330ms directly preceding the verbalisation of the dual-task calculation.

Our findings suggest that attention is important for the maintenance of effective gaze behaviours, supporting previous claims that maladaptive changes in visual-search observed in high-risk older adults may be a consequence of inefficiencies within attentional processing. As these changes were most pronounced in high-trait-reinvesters, we speculate that reinvestment-related processes placed additional cognitive demands upon working memory. 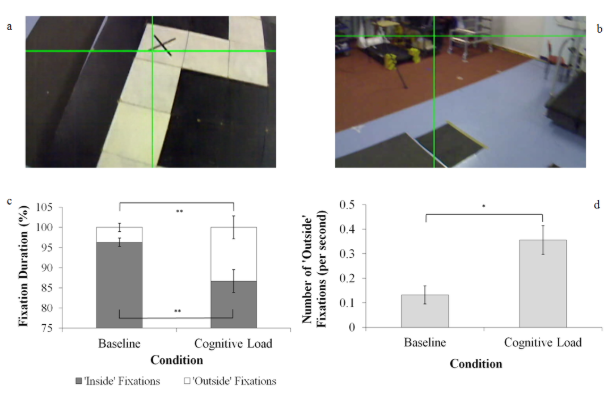 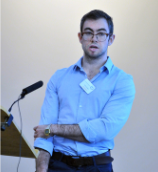 Toby Ellmers is a Ph.D. Student at the FP² (Falls Prediction and Prevention) Lab at Brunel University, London. His research involves the studying of the psychological mediators of elderly fall-risk and the development of intervention programs grounded in psychological and motor-learning theory.