Do walking and cognition share the same functional brain networks?

Walking is a common yet complex activity. Accumulating evidence suggests that walking is not fully autonomous, and instead, relies upon considerable cognitive input and its underlying cortical structures. We now know that the brain is organized into distinct functional networks comprised of spatially separated, yet functionally connected regions. However, it remains unclear whether and how these functional brain networks are involved in the control of walking. Besides, walking has distinct features such as gait speed and gait variability. Is it possible that these features are controlled by distinct functional brain networks? If so, in what way? In this study, we start to answer some of these questions by using a neuroimaging technique that evaluates connectivity between brain regions that share functional properties; namely, resting-state functional magnetic resonance imaging (rs-fMRI).

Twelve older adults with relatively slow walking speed and mild-to-moderate cognitive impairment, yet without overt neurological disease, completed a gait assessment and a rs-fMRI visit. Preferred gait speed (m/s) and gait variability (%, coefficient of variation of stride time) were evaluated. Functional connectivity within and between seven known functional brain networks was estimated and compared to gait outcomes. We discovered that gait speed and variability were linked to distinct networks (see Figure). Specifically, gait speed was correlated with the strength of functional connectivity within the fronto-parietal network, suggesting that this gait feature depends upon the integrity of communication within brain regions linked to executive functions. Gait variability, on the other hand, correlated with the degree to which spontaneous brain activity within the dorsal attention network and the default network were anti-correlated. This suggests that one’s gait variability, or steadiness of walking, may depend upon the capacity of the brain to dissociate the neural activity of these two networks—a capacity that has been closely linked to sustained attention.

This small study demonstrated for the first time that clinically-meaningful gait features are linked to the functional integrity of distinct brain networks. Future studies are warranted to 1) examine these relationships in other populations such as Alzheimer’s disease or related dementias, and 2) determine if gait speed and variability can be differentially targeted by non-invasive brain stimulation. These results, while preliminary, also suggest that clinicians should treat gait speed and variability as distinct features of locomotor control that are controlled by cognitive functions. 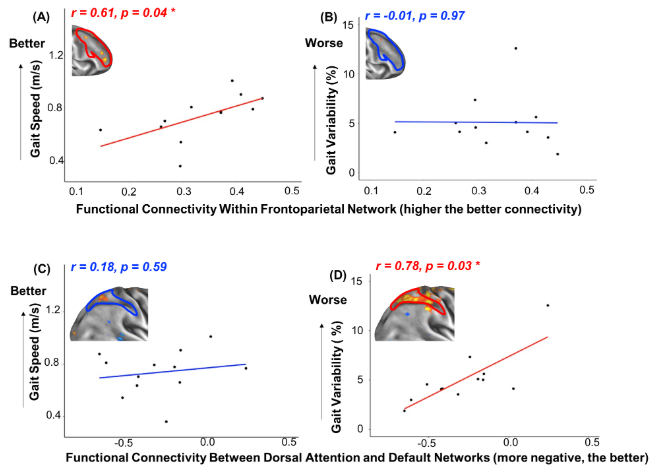 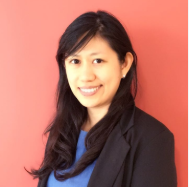 Amy was first trained as a physical therapist followed by graduate trainings in biomechanics and neuroscience. She is currently a post-doctoral research fellow in the Harvard Translational Research in Aging Program. Her career goal is to understand the neural control of locomotion and to translate research findings to enhance functional independence in older adults.