Multiple sclerosis (MS) is characterized by central nervous system white matter lesions that affect people’s ability to move independently. Further, people with MS often report significant asymmetries in muscle strength and function in the left versus the right leg. These are often associated with increased postural sway (i.e. worse balance) and less symmetrical stepping patterns during walking (i.e. worse walking). It is no surprise that such lower limb asymmetries are frequently associated with poorer balance control, falls, and reduced quality of life. Currently there is limited understanding as to why these limb asymmetries exist in MS and which areas within the central nervous system contribute to these mobility-limiting issues. It is also unknown whether improving these lower limb asymmetries may concomitantly improve balance and mobility during activities of daily living.

To address these questions, participants stood on a platform and tried to maintain their balance while the  platform continually slid forward and backward at a fixed frequency of differing amplitudes. We measured their ability to anticipate changes in direction (i.e. temporal performance) and their ability to control the amplitude of sway (i.e. spatial performance) with repeated exposures to this moving platform. To understand the neural underpinnings of postural motor learning, we correlated the acquisition and retention of practice-related improvements in postural control to brain white matter microstructural integrity acquired via diffusion weighted magnetic resonance images using a tract-based spatial statistical approach. Despite having worse postural control than control participants, those with MS exhibited improvements in temporal performance (over one day of practice) and retention (ability to maintain improvements 24 hours later) in a similar manner as control participants. Improvements in temporal performance were directly correlated to microstructural integrity of white matter tracts in the corpus callosum, posterior parieto-sensorimotor fibers and the brainstem in people with MS. Within the corpus callosum, fibers connecting the primary motor cortices (red fibers in Figure 1)were most strongly correlated to temporal improvements in postural control, in contrast to those connecting pre-supplementary or supplementary motor areas (yellow and orange fibers in Figure 1). 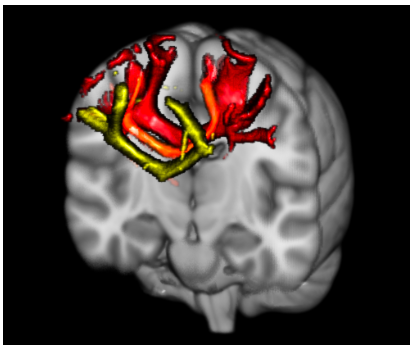 Research within the Sensorimotor Neuroimaging Laboratory at Colorado State University is designed to understand the contributions of the brain’s structural and functional neural networks to everyday movements. We leverage this understanding of the nervous system to develop new therapeutic interventions for individuals with sensorimotor dysfunction. Our laboratory utilizes a range of neuroimaging techniques including functional and structural magnetic resonance imaging, diffusion tensor imaging, electroencephalography, and transcranial magnetic stimulation to assess neuroanatomy and neurophysiologic function. These state of the art imaging techniques are integrated with experimental paradigms relying on the biomechanical analysis of sensorimotor control to provide a comprehensive view of the neural control of movement.