After stroke, asymmetrical stepping and standing balance is commonly observed when weight bearing or spatiotemporal parameters are measured. These asymmetries are thought to circumvent stroke-related impairments and enable stroke survivors to walk and maintain their balance while standing. However, at the same time, motor planning is also impaired in stroke survivors which impacts the integration of incoming sensory information during functional daily movements and standing balance performance. This process is not well understood but could explain stroke-induced asymmetries. Movement-related cortical potentials (MRCPs) – measured using electroencephalography (EEG) – can be used to estimate motor planning processes in the cortex. After a stroke, longer duration and larger amplitude MRCPs are detected for planning paretic hand movements compared with the non-paretic hand. These differences to the MRCP are thought to reflect the longer time and greater cognitive effort needed to plan a movement, respectively. The aim of this study was to examine motor planning via MRCPs to understand whether motor planning can be attributed to difficulties with stepping and balance after a stroke.

Self-initiated stepping was performed by participants with sub-acute stroke with the paretic and non-paretic legs. Both EEG and electromyography recorded brain and muscle activity, with movement onset identified by electro-goniometers affixed to the lateral knees. There were no significant differences in stepping performance between legs or in MRCP measures (p ≥ 0.069, Figure). However, when the paretic leg was stepping, the burst onset of the biceps femoris (or hamstring) muscle influenced the MRCP amplitude (p = 0.024; Figure).

This indicates that cortical planning for initiating stepping is similar between legs after a stroke. Between-leg symmetry may indicate that a portion of the motor planning is actually to prepare for the movement as a whole (e.g. walking). Comparable motor programs may be needed to plan the shifting of the centre of mass, irrespective of whether it is to plan stepping of the paretic or non-paretic legs. It is likely that the motor plan required for stepping reflects this pattern in the sub-acute phase after stroke. The earlier hamstring muscle activity in the paretic leg may then be associated with a lower cognitive effort as measured by the MRCP. The MRCP may therefore be an important process for the timing of muscle preparation for initiating stepping in stroke survivors. 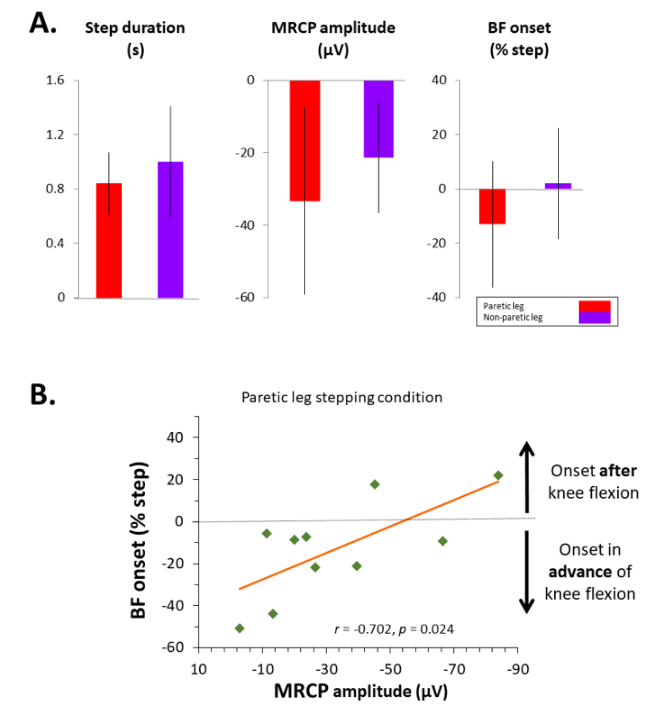 Figure: In panel A, no differences are seen between the paretic and non-paretic legs for step duration, movement related cortical potential (MRCP) amplitude or biceps femoris (BF) onset. Bars indicate standard deviations. In panel B, higher cognitive effort (MRCP amplitude) related to later onset of BF burst in the paretic leg stepping condition. Data points above the horizontal line indicate individuals with the onset of BF burst after knee flexion, and points below the line specify individuals that show a BF burst in advance of knee flexion. Smaller MRCP amplitudes were found in those with earlier onset BF suggesting that lower cognitive effort is required with an anticipatory burst of hamstring muscle activity. 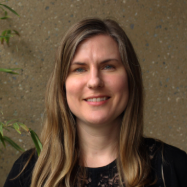 Dr. Peters is a physiotherapist, postdoctoral fellow at Simon Fraser University, and research associate at University of British Columbia. Dr. Peters completed her PhD in the neurophysiology of stepping after stroke. Her current interests are to examine the acute to chronic phases and patterns of recovery post-stroke.