Deep brain stimulation in Parkinson’s disease: How to stimulate the brain to walk optimally?

Deep brain stimulation (DBS) of the subthalamic nucleus (STN) can improve gait in Parkinson’s disease. It does so mainly by improving the step length and step velocity, leaving the step time unchanged. However, this temporal aspect of gait is critical in Parkinson’s disease and a pathophysiological hallmark of freezing of gait. In this study, we studied if stimulating the substantia nigra pars reticulata (SNr) would improve step time and thereby be a target to remediate freezing of gait. The SNr can be stimulated with current DBS electrodes by stimulating the most caudal contact, instead of one of the upper contacts for STN. We were interested in the effect of SNr stimulation because the SNr has inhibitory GABA-ergic projections to the mesencephalic locomotor region. This region can induce rhythmic stepping behavior and is integrated in the temporal modulation of gait. Second, combined STN+SNr stimulation have shown beneficial effects for the treatment of freezing of gait. Here, we studied different spatial and temporal gait parameters to learn more about the role of STN or SNr in locomotor integration.

During the experiments, Parkinson’s disease patients with a DBS implant walked overground in three conditions (without stimulation / STN stimulation / SNr stimulation). We extracted gait parameters from inertial sensors mounted on both ankles and lower back. We observed that spatial parameters of gait, such as step length, were only improved by STN stimulation. Temporal gait asymmetry, assessed as the difference in swing times of both legs, was improved by both STN and SNr stimulation. Furthermore, a more medial location of the caudal contact was associated with a greater improvement of gait regularity by SNr stimulation. This suggests that a more medial stimulation of the SNr is more effective in reducing the variability of gait.

We observed that both STN and SNr stimulation can improve temporal gait asymmetry. This means that both target areas entrain locomotor integration at the level of the mesencephalic locomotor region. In animal experiments, stimulation of the mesencephalic locomotor region can modulate cadence, but not step length, which is in line with our results. Also, it is observed that a more medial stimulation of the SNr in rats modulates temporal integration of gait, as opposed to stimulation of the lateral part of the SNr. It might be possible that by improving gait asymmetry, the occurrence of freezing of gait could be reduced. Further research, including combined STN+SNr stimulation, is needed to confirm this finding and is being conducted at the moment (ClinTrials.gov: NCT02588144). Together, these findings help to decipher the pathophysiological networks and mechanisms involved in gait problems in Parkinson’s disease patients. 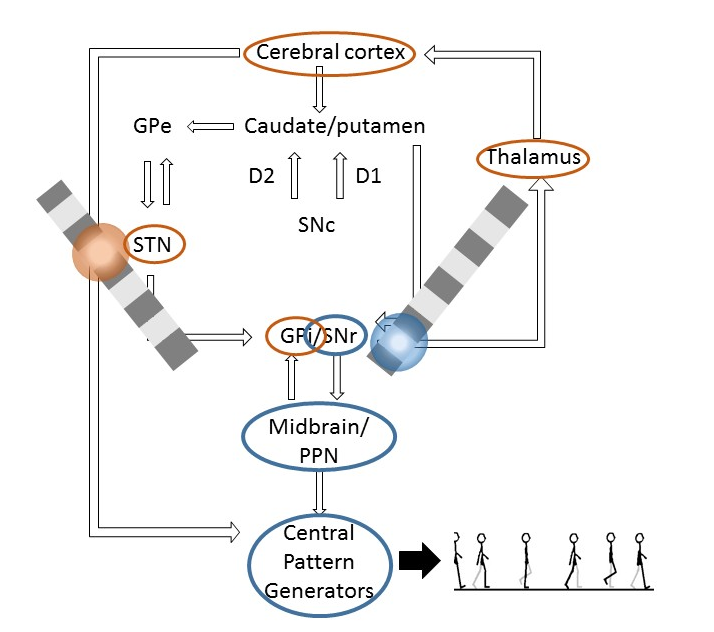 Marlieke Scholten is a post-doctoral researcher at the Hertie Institute for Clinical Brain Research in Tubingen, Germany.  She aims to get a better insight in the pathophysiological mechanisms underlying Parkinson’s disease and especially freezing of gait using electrophysiology, electromyography and kinematic signals.