Gait analysis on a treadmill can provide data with a high resolution over a large number of repeated steps. Commercially available treadmills often incorporate force plates, which allow for the identification of steps based on excursion of the centre of pressure (CoP). Previous studies suggest that CoP gait event detection corresponds well with kinematic-derived detection of the same events, at least during steady-state gait in healthy people. However, the accuracy of gait event detection during enforced gait patterns and pathological gait has not yet been tested. To address this caveat, we validated gait event detection on a single force-plate embedded treadmill with the ability to project targets on the belt to elicit altered gait patterns. And, with the help of my Ph.D. supervisors and a very helpful reviewing process this resulted in my first ‘first’ author paper.

We collected gait data of young healthy adults and stroke survivors during target stepping on the C-Mill treadmill (MotekForcelink, Culenborg, The Netherlands). Gait events were detected using one kinetic and two kinematic methods: 1) vertices of centre of pressure (CoP) cyclograms, 2) vertical velocity and position of the heel marker, and 3) anterior velocity and position of the heel and toe markers. A comparison of these methods revealed that centre of pressure-based gait event detection was most accurate. The kinematic method 2 (vertical velocity of the heel marker) was unsuccessful in 20% and method 3 (anterior velocity of the heel marker) was unsuccessful in 7% when compared to method 1 (CoP based). Both kinematic algorithms detected gait events significantly earlier compared to CoP gait event detection, which can be explained by the fact that the foot is placed on the surface before it is actually loaded. In addition, the high percentage of gait events which were missed by kinematic methods suggest that CoP gait event detection may be more appropriate for altered gait patterns. 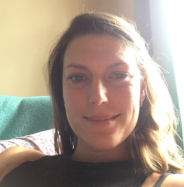 Susanne’s Ph.D. at Salford University (United Kingdom) focussed on gait adaptability in stroke survivors. Here she studied how gait is adapted to provide fundamental knowledge, which helps preventing falls and understand how movements in general are adapted. Her postdoc at Virginia Commonwealth University (United States) focusses on how low back pain affects lumbar movement, and if this can be remediated by training in a virtual reality.