Stepping is often a critical last-resort response to recover balance following a slip or trip. Interestingly, when older adults step to regain forward balance, they often lose stability, tipping over in the sideways direction. This sideways instability likely arises during restabilisation, after they have placed their stepping foot on the ground, and is particularly relevant because of its relationship to sideways falls and hip fracture. This work focuses on the biomechanics of the “restabilisation phase” of the stepping response, to better understand what causes sideways instability when older adults try to regain balance in the forward direction.

Twenty healthy younger adults (mean age: 24 years) and twenty healthy older adults (mean age: 71 years) participated in the study. The experimental setup tested participants’ forward stepping responses using a single step, which was provoked with a tether release from a standardized forward leaning position (Fig. 1a). A motion analysis system and four force platforms were used to record whole body movements and applied forces, as participants took a step and restabilised. Instability was defined by how far the whole-body centre of mass (COM) progressed in a sideways direction. We also examined the divergence between the ground reaction force vector and the whole-body COM at two specific instances, which we believed were related to instability. Our previous work has suggested the first peak divergence (P1) may arise from pre-planned muscle activation, initiated before stepping foot contact. The second peak divergence (P2) is believed to arise in response to instability after foot contact. We observed that older adults had greater sideways COM movement. There were no age-related differences in the amount of divergence between the ground reaction force and the COM. The timing of the P2 peak divergence, however, was increased among older adults (Fig. 1b). Further, the extent of sideways COM movement was correlated with the length of time needed to achieve the P2 peak divergence. 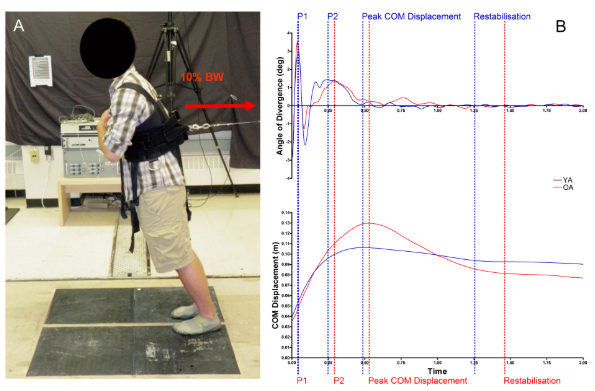 Older adults appear to have the capacity to control sideways instability, but do so with inappropriate timing. Our results suggest that sideways falls among older adults during forward stepping reactions may be caused by a delay in either detecting or responding to lateral instability arising after foot-contact. Balance training programs, to reduce falls among older adults, could include tasks to challenge restabilisation, such as prescribing foot placement or changing stepping surfaces. Future work is required to understand the specific sensory and/or motor components responsible for sideways instability. 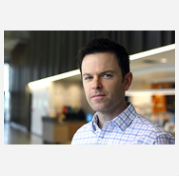 Faculty of Kinesiology and Recreation Management, University of Manitoba

Jon obtained his PhD from the University of Waterloo and received post-doctoral training with the Canadian Partnership for Stroke Recovery, Sunnybrook Research Institute, Toronto. His research aims to understand the neuromechanical mechanisms by which humans maintain stability, and to reduce the challenges in stability control faced by older adults.